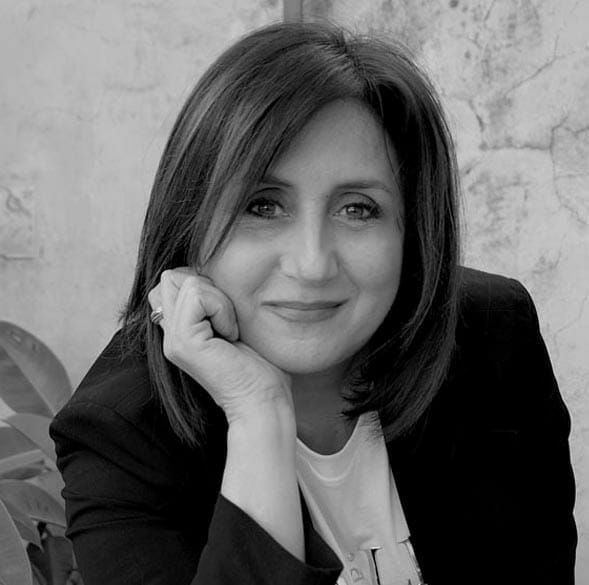 When Iranian artist Dorna Abyak landed at Naples airport for the first time in 2019 to participate in an exhibition organized by the Pandora Association at the Ceramics Museum, I was there, ready to welcome her. I expected to meet a woman wearing an Islamic veil, as evidenced from the passport photo sent to the Association for her event participation accreditation and as we are accustomed to seeing in the media. Two profoundly different realities - - hers and mine - - ready to meet on a blind date! Further, as a victim of the common conditioning regarding the Islamic world, I confess my surprise when I instead found myself in front of a beautiful young woman, looking anything but modest, dressed in Western style and who spoke good English. At that instant, I visualized two dissonant images of the same person, and for a moment, I felt disoriented! Her kind manner and her pleasant way distracted my attention from a deceptive image that emanates from a deep-rooted prejudice. A contact was made that slowly turned into a friendship lasting since. With this, I initiated my approach into the world of Iranian artistic ceramics - - daughter of the rich and ancient Persian culture - - a culture marginalized by years of isolation and whose history is known to me only indirectly as a result of my university studies in Paris with prof. Jacques Couland, one of the leading scholars of Middle Eastern history. Despite the embargo, Iran is a country with great economic potential; it is among the twenty richest countries in the world, not only for its immense reserves of oil and gas but also because it is an industrial country with a millenary propensity for trade and craftsmanship of the highest quality. The distance between our cultures is noteworthy; the consequential effects of historical events - - deliberately aggravated by a policy of international sanctions that have forced Iran into a condition of isolation albeit the glimmer of hope opened by agreements reached under the Obama administration but immediately closed by the Trump's opposing choices - - have only increased the level of ignorance regarding the plight of Iranian women in recent decades. In the light of the meeting Dorna, realizing the prejudices against Iranian women first-hand was disconcerting while at the same time understandable when viewed in an international political context of mutual isolation and mistrust. In addition to being morally condemned in the Western world, the condition of Eastern women, especially Iranian women, has been transformed into a symbol of oppression and the lack of freedom within a country and an its entire culture. Yet, the modernization of this culture, with the abolition of the veil in a context where a woman's body becomes the battleground for both sides, necessitates a transformation for the Islamic world; an opening that represents the first step towards capitulation to the prevaricating Western culture. However, between the demise of the veil, hoped for by the Western world, which interprets it as a founding element of a blatant gender obscurantism, and the consequent fear of identity loss and control over one's cultural roots on the Islamic side, lies that fine line where, in a play of light and shadow, the veil debate is not a question that can alone resolve the contradictions of the Iranian women's condition as a universal female condition. And it is precisely in asking what are the socially relevant differences between the condition of Western women and those of the Middle East, especially in cultural and artistic spheres, in close comparison with Dorna, that similarities emerged which shift the debate on the universal discrimination against women, perpetrated at any latitude of the globe, albeit with different gradations and nuances; in the poor South as in the prosperous North, in the East as in the West. It is for this reason that I take this opportunity to directly involve my friend and colleague Dorna, by inviting her to give her testimony in this context, which to most, might seem counter-cultural or worse, still propaganda, but in reality tells us the truth of an emancipated and genuine artist.

LIFE AS AN ARTIST IN IRAN
For the past four years, with great enthusiasm, I have been a member of the "Pandora - Artiste Ceramiste" Association, and I am now the head of the Association for my country, Iran. In May 2019, I took part in an event organized in Italy by the Association, and on this first trip to Naples, I was able to see how, outside my country, we Iranian women are considered unfortunate, oppressed and marginalized; women without rights, forced to wear the veil as a stigma that unites most Muslim women in submission and humiliation. It was precisely on that occasion that I was finally able to reveal to my Italian friends and colleagues what is not visible to the Western world: my life, in many respects, is not so different from that of any Western woman. The world is currently showing a backward Iran where women are trapped in chadors, illiterate and absent from society. False! Women in Iran are veiled but they are largely well integrated into the work environment; they are the majority in universities, they actively participate in political life and they are an integral part of the production and consumption of culture. Iranian women are not only dressed in black veils - - the chador is worn only by a strongly religious minority - - most cover themselves with colorful headscarves (Hijabs), from which flowing hair can be glimpsed crowning made-up faces. The veil that is worn in the public workplace is almost a uniform; what one wears for a walk can be a simple silk handkerchief that barely covers the head over fashionable clothes. Fortunately, the veil is not an impediment to the desire for knowledge and change that is felt, above all, by young women. The last decade has seen a great transformation, and many women are self-employed and unmarried. Divorce is allowed, as is abortion, and most women are university graduates - - so much so that “blue” quotas have been introduced in universities to guarantee opportunities for men to attend. Women are very active on social networks and many speak English. The consequence of all this in Iran is that marriages have decreased against a high divorce rate and declining birth rate. To specifically counter drops in marriages and births, the government has launched a free dating application that allows people to search for and choose a partner in an unconventional way while maintaining compliance with Islamic law. Contemporary Iran is moving from highly traditionalist behavioral structures to decidedly more modern ideas that see changes in all fields: in the social as in politics, in art and culture, as well as in the economy. There is now greater cultural freedom, as changes derived from new knowledge in the arts, ethics, rights and customs are slowly transforming Iranian society while respecting its religious traditions. Among these transformations, those in the cultural and artistic fields have a special and important place. Although the most prestigious academic institutional positions are mostly assigned to men, statistics show the increasing presence of professional women in both academia and research laboratories. However, if we look at the arts sector from the point of view of women and the position they occupy in this field, we can only arrive at contradictory results. The position of women in art is not that far removed from the position of art itself in Iran. In this analysis, other social factors influencing the evolving role of women should not be overlooked, nor should the role of politics. The government and its cultural policies are very decisive in art and the role of women in art, often taking conflicting positions that seek to impose control on the work of many contemporary Iranian artists who in fact proclaim themselves feminists, although they express this position through diverse idioms and styles. Iranian female artists, like other female artists around the rest of the world, make use of modern artistic communication means; very often digitized, but often operated in a context that is highly limited and opposed by government censorship. However, this applies not only to female artists, who are particularly discriminated against as women, but also for male artists and journalists, as well as all those who use media considered dangerous and destabilizing for the regime. Therefore, all artistic and cultural activities are subject to the government authorization and consent of their representatives.

THE CONDITION OF AFGAN REFUGEE WOMEN IN IRAN
The government control that restricts us in so many ways has not prevented us, as artists, from helping Afghan women and the many female artists among them, forced to flee the country as a result of the events during August 2021 and take refuge in Iran, which is one of the countries that has always hosted them. The problems due to their presence cannot be ignored; problems that mainly fall on Afghan women who are the most socially penalized. In the first days after the arrival of Afghan families, we Iranian men and women, including myself and my independent artist friends, welcomed many Afghan migrants. Among them many women artists, whose life in their own country was seriously endangered; we gave them hot food and clothes by hosting them in artist residences. However, the illegal immigrants, especially women and girls, who continue to arrive are many; they are the most vulnerable and deprived of any working and educational conditions. Public institutions but also private citizens have worked hard to help these women and their children. Marginalization is one of the negative consequences of the illegal presence of Afghans in Iran, but it is far more damaging to Afghan women and children than men. Today, Iran and Afghanistan are separated by geographical and political borders, but they share a common religion, a common language and common solar calendar - - in other words, the culture of each countries has many points in common and the bond between the two countries is very strong. We Iranian artists feel a heavy responsibility that we cannot shirk with respect to the relations between the two countries. Through art, love, equality, unity, peace and friendship can be expressed with a common and profound language. Art has no borders, art does not divide, it brings people closer together, but there is a long way to go; between "saying and doing” there is power, influence, politics and the distorted communication that goes with it. Afghanistan has been the cradle of human civilization thanks to its strategic geographical position - - a passageway, a bridge between cultures thousands of years old, between East and West. The ancient tradition of ceramic craftsmanship of this country dates back to 1000 BC, flourished during the Bakhtiari and Ghaznavid periods and there are many common roots specifically with Iran. Handicrafts in Afghanistan were mostly practiced by women and passed down from generation to generation. Our struggle as artists and promoters of ceramics continues, and will precisely continue as a banner of peace for all the people of the world. Art unites everyone, and ceramic art made from our mother earth is a medium, a symbol of union that makes no difference between men and women, nor between wars. War is war anywhere in the world, and human beings are such regardless of gender. There is nothing more beautiful than knowing other cultures and realizing that the whole world is truly a country, despite the infinite differences and regardless of the law that requires us to cover our heads with a veil. 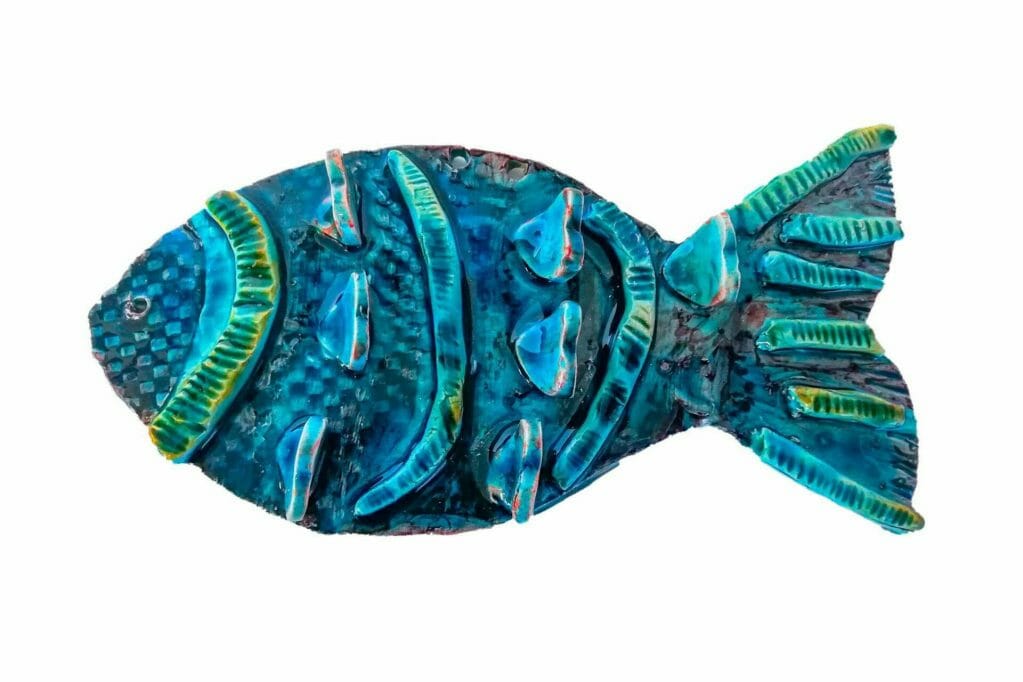 We all know that ceramic is a unique medium to help people rediscover their creative potential, for acquiring autonomy and for facing […]
VISIONS 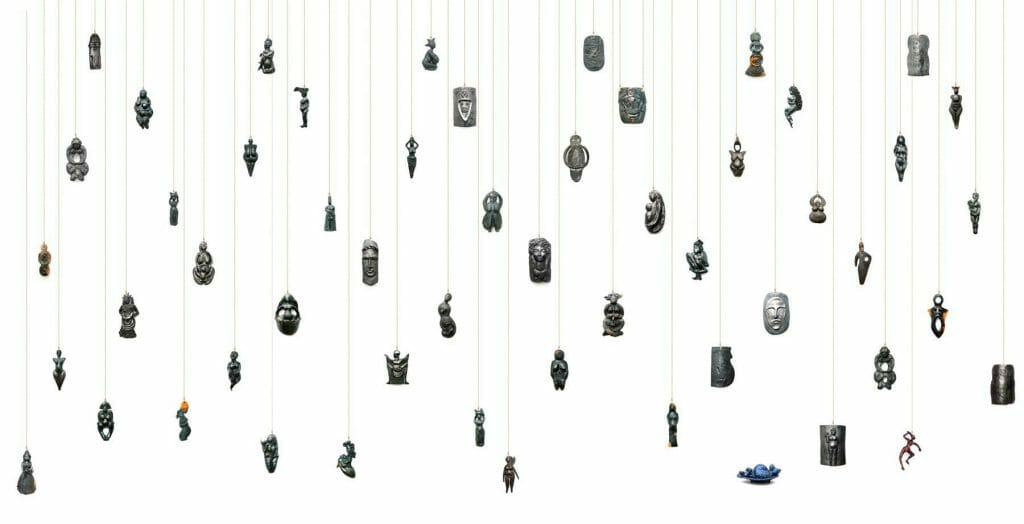 The substance of the form

In a world pervaded by images and connections that flow and cross us continuously, emptied in content like disposable voids […]
VISIONS 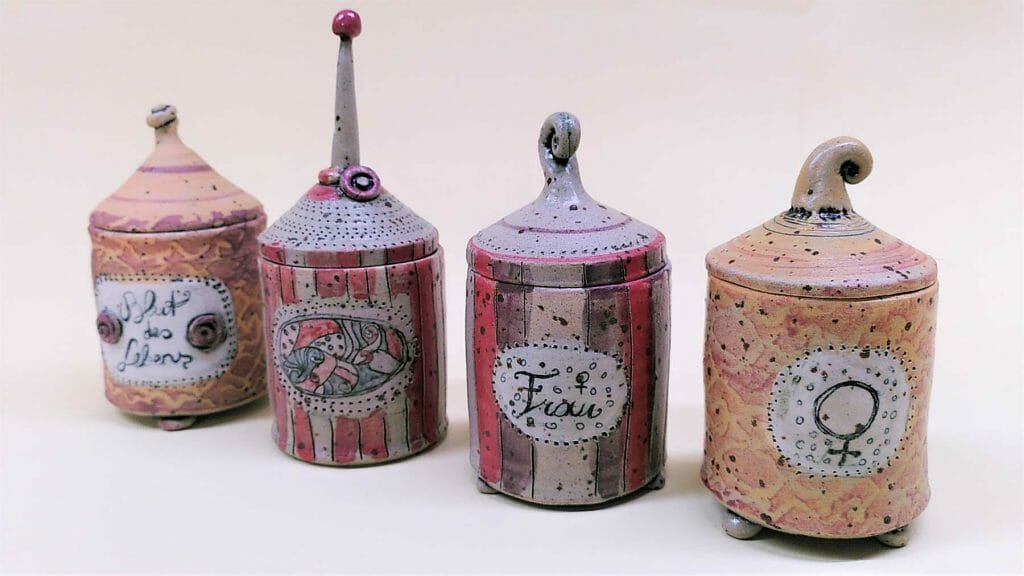 Happiness in a box Elisabeth Minichbauer

I am Elisabeth from Stockerau, Austria; master ceramist and state-certified ceramic designer, with a workshop and small shop […]
Matres 0
MAGAZINE MATRES