The mother earth of clay

Rufoli History of a hilly area 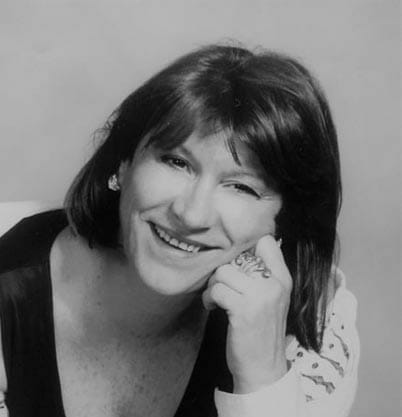 Everyone knows the ceramic tradition of Vietri sul Mare, but few are aware that there is a clayey hill in Salerno whose activity of extraction and processing predates the Vietri one by millennia. Rufoli is the motherland from which the potters of the coast draw the raw material to render it an artifact. The ancient furnaces for the production of "riggiole" are the typological element that characterizes this site. Since very remote times, the entire hill extending from Brignano to Ogliara has always been destined to the extraction and transformation of clay. Traces of clay processing have already been found in the ancient Etruscan-Samnite necropolis of Fratte. Thus, ceramics have always been seen as an integral resource of an economic circuit with an agricultural character. Terracotta has represented the basis of local building for centuries, and it was precisely starting from those semi-finished bricks that the Vietri sul Mare ceramic school originated, revitalized in the 1920s and 1930s with the contribution of German artists who laid the foundations for the Vietri decorative style. After the Second World War, activity resumed in Rufoli, but in a rapidly changing technological landscape. The bundle furnaces of Rufoli suffered a profound crisis. By the late fifties, and in the following decade, new, cheaper bricks took the place of traditional handcrafted bricks. Products on an industrial scale (also produced in the area, for example, by D'Agostino, the market leader in the sector up to those years), supported the building boom of those years more economically. The overall volumes of artisan productions underwent a sharp contraction and we moved towards a specialization in building and floor tiles. Planimetrically, a furnace is configured as a closed, quadrangular enclosure, placed along a path and bordering the countryside. The construction technique generally favors tuff. The use of terracotta is instead predominant in the formal definition of furnace openings or closures. Now, almost all abandoned, the furnaces rise near the large quarry that expands from the nucleus of Rufoli to the slopes of Giovi hill and the valley towards Brignano. Immediately behind the church of S. Michele are the ruins of the Della Rocca furnace. Next, located along the road that crosses Rufoli, lie the Soriente furnaces and further on, connected to the current De Martino furnaces, what remains of the Ventura property.

The Bundle Furnaces
The time of the furnace is marked by the repetition of always identical gestures. Clay blocks are pressed and shaped. The forms obtained are stacked and covered with bags so as not to let them dry out. The trimming takes place on a wooden bench. The clay scraps (cuttings) fall into the wheelbarrow in front of the bench, and they will be in part used as spacers when loading the furnace. The long and delicate drying process then begins. Subsequently, the bricks are exposed to the sun in a herringbone or butterfly pattern. You are finally ready to load the kiln. This takes four days of work. Firing takes 36 hours. The tiles in the kiln are arranged in a cross, to allow the fire to circulate. Along the walls of the oven, to make the flames circulate, pieces of fired bricks are placed. Wedges of dried clay are placed between the tiles. Once the kiln is loaded, the doors are closed with bricks, and the holes sealed with raw malleable clay, leaving a peephole with the view in gray tuff. Fire is apparently free to break in with its vital energy. In reality, it is man who guides it by spying on it, to bend it according to his own need. Thousands of bundles (“fascine”) are collected to be immolated. The fire blazes in the ditch, with the crackling and singing of the wood: a scent of undergrowth, of burnt laurel, expanding at times, unequal and sudden. It is the incense of the rite perpetuated under the image of Sant’Antuono, to whom a candle is offered for the duration of the firing. The kilnsman does not allow himself a break; watchful eyes scan the color and sound of the flame. Black smoke comes out of the peepholes: it is a sign that the condition of the clay is changing. Gradually, there is a transition from the gray of the molded material to the different shades of baked clay, gilded by the fire. The effort is over. The riggiole are chipped by the squarer. They are made to sing: a dull sound is a sign of bad firing.

The De Martino Furnace
The De Martino family has been working and producing handcrafted terracotta since 1479, as stated in a notarial document kept at the Benedictine Abbey of Cava de' Tirreni, proving its distant origin; a work based on manual skills that has been handed down for centuries. As described in the previous paragraph, it is the same ritual of the past. Even today it is possible to see the entire production cycle by visiting the only furnace that survived the massive industrialization that began in the 1950s: shaping, firing and squaring. After the manual steps, the tile arrives in the kiln, and it is there that the mystical experience of firing takes place. The furnace is closed and blessed, by impressing a cross on the concrete of the newly walled door. The terracotta from the De Martino furnace can be said to be a timeless, noble material. It can be seen in the ancient palaces of Rome, such as Villa Doria Pamphili, but also in modern structures such as the luxurious Bryant Park hotel in New York City. There are three main products: classic terracotta made with an exclusively clay mixture that gives the tile the terracotta color. Its surface appears a little wavy. Colored terracotta is a mix of clay, oxides and dyes. The possibility of customization is maximum. The decorated terracotta is instead a “riggiola” (floor tile) glazed and decorated by hand according to the Campania tradition.

The Women of the Furnace
The workers and managers of the furnace were for the most part men; the De Martino brothers are Antonio, Luigi and Tommaso, but there were women in the past who dedicated themselves to some stages of production, in particular to hand molding. This operation, which consists of pressing the clay into a wooden mold and then smoothing the surface, was carried out from the postwar period up to the 1990s by Teresa Avagliano, the mother of the current De Martino managers. Subsequently, it is from 1998 until 2004 that another woman worked as director of the decoration laboratory, bringing new ideas and new shapes: she is the architect-ceramist Sofia De Mas, who in 2003 brought her creative laboratory from Rufoli to Positano, on the occasion of the Cartoon on the Bay event. The workshop was held en plein air with filmmakers, cartoonists, illustrators and actors participating in the Festival, which merged into the exhibition Porte Aperte 2003. Subsequently, Nathalie Figliolia also made her experiments there with innovative decoration and colors. Another artist who worked at the Fornace is Patrizia Grieco, organizer of various events including Ogliara - Paris - Ogliara (2014 - 2015), and who saw an exchange between two artists, Grieco herself and the painter and former French television director Jean-Pierre Duriez. The event made it possible to make Rufoli terracotta known in France. The exhibition of Jean-Pierre's inspirational paintings and Grieco's sculptures was held in the Center Danmark on the Champs Elysees in Paris.

THE FURNACES OF RUFOLI
The history of the small village of Rufoli (hamlet of Salerno, Campania, southern Italy) dates back to the Middle Ages, when a series of furnaces established the site. With industrialization, artisan terracotta went into crisis and the kilns were gradually closed. Only the De Martino furnaces survived, still operating with the ancient ritual of fire. Over the years, the De Martino factory has had various women working there with different roles. 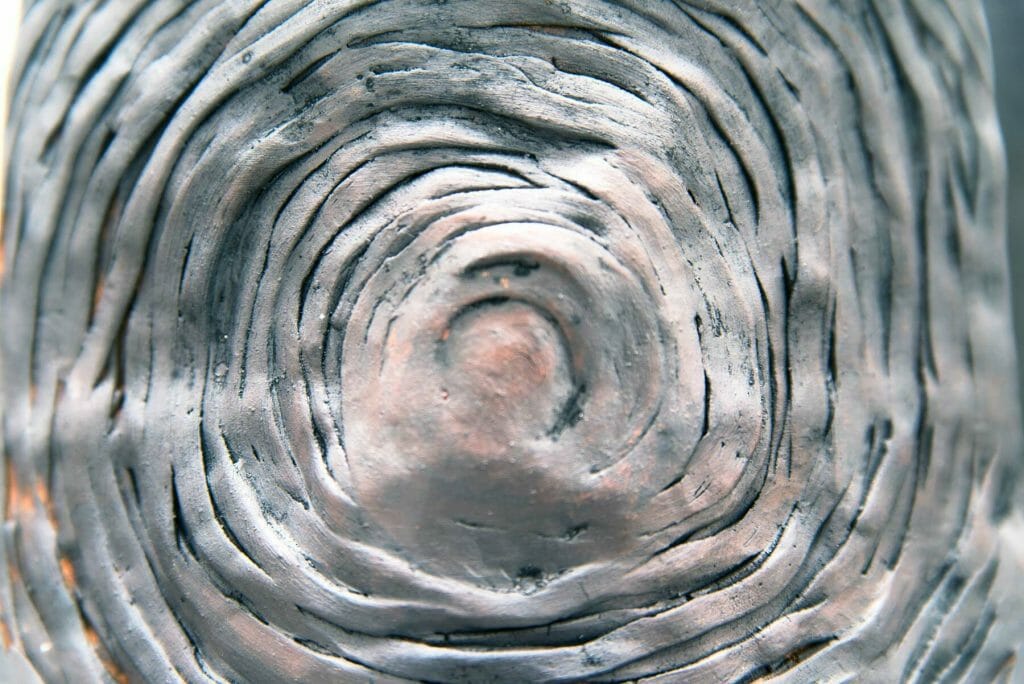 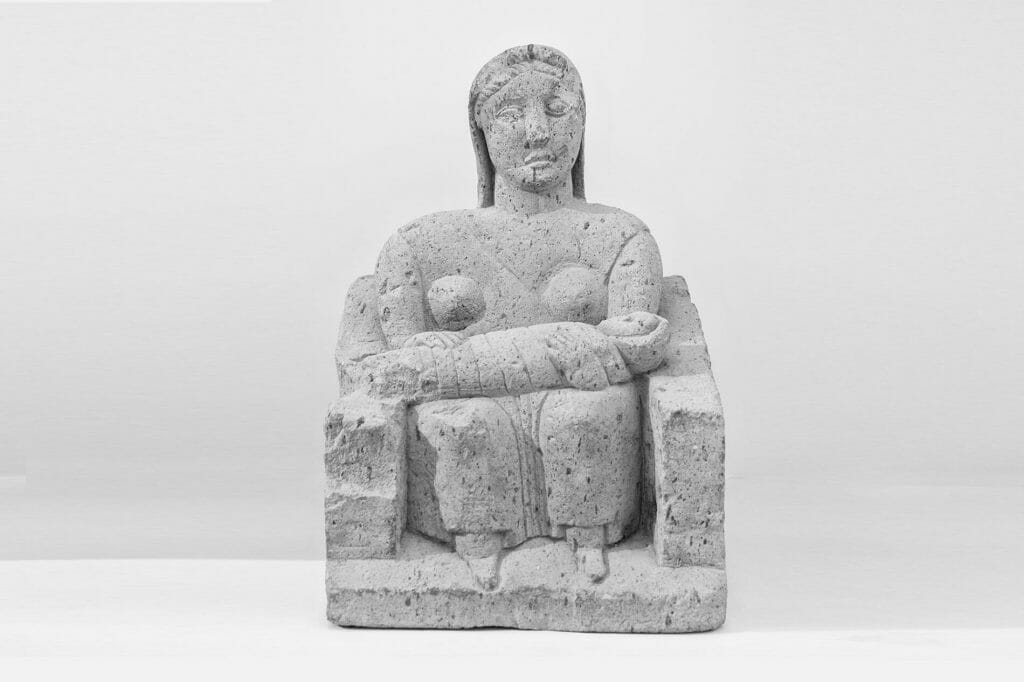 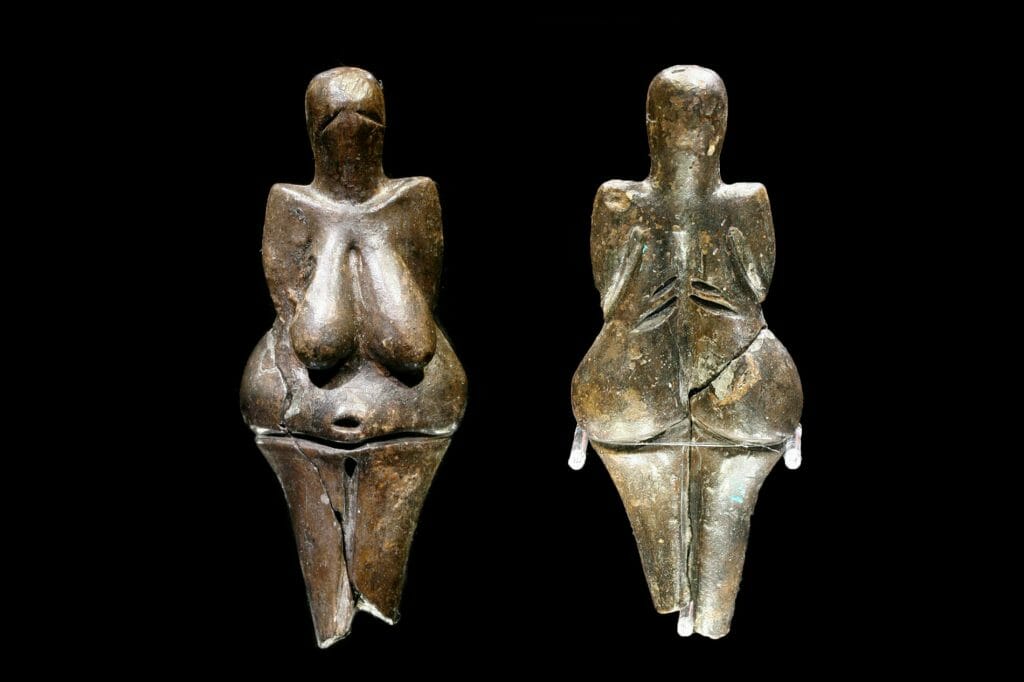 The Venus of Dolní Vestonice

In July 2019, I was invited to give a lesson on “the chemistry of ceramic materials” at the First International School of Sciences Applied to […]
Matres 0
MAGAZINE MATRES